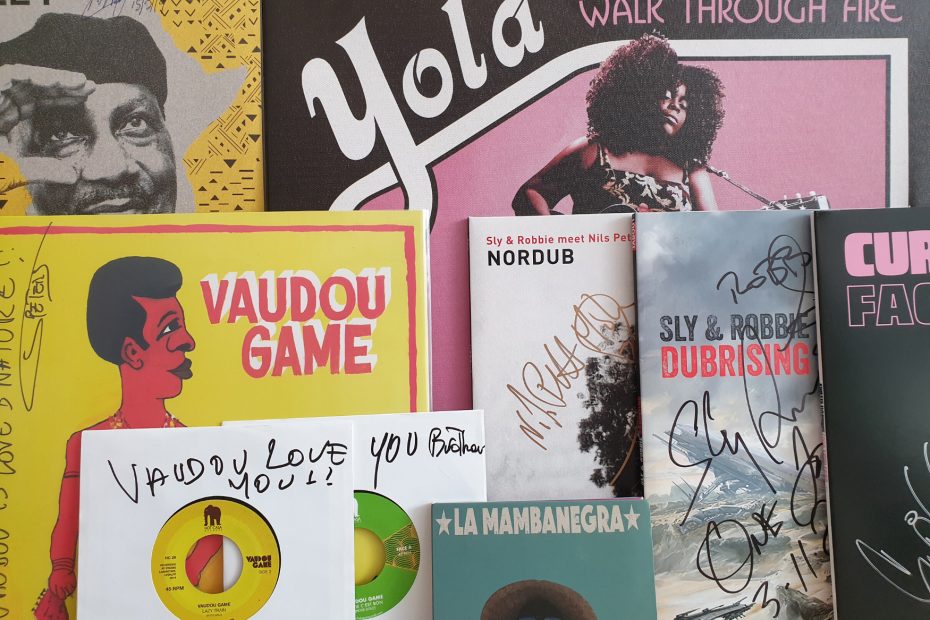 The weather has been really good the last couple of weeks, stirring up the festival vibe within me that has been hibernating for far too long. Maybe hard to imagine with the current weather condition, at least here in the Netherlands it is raining right now, but with a little imagination you will get there. Normally the festival season was already well underway with the Liberation and Metropolis festival and a bunch of live shows I had tickets for. Seeing that everything has been cancelled or postponed, I decided to emulate the festival vibe myself. Packed with a tropical punch (well-spiked off course), a Bluetooth speaker and sunglasses, I took place in my garden including an artificial miniature festival meadow. I was thinking about getting a portable toilet but maybe that was taking things too far. All I had to do was selecting the appropriate music to get this festival underway. As soon as La Mambanegra blasted out of my speakers, the vibe caught on and I was taken back daydreaming of the day when I saw them playing live. I remembered that I bought the CD after an exhilarating show and the whole band signed it for me. Afterwards we took the band into town for a night I remember absolutely nothing of.

The idea to write something about the autographed album covers in my collection was already something I had in mind but it just needed a little push. La Mambonegra did just do that, next to the internal warning that I probably shouldn’t have spiked the punch that much. So without stretching this introduction any longer here are some of my favorite signed albums. 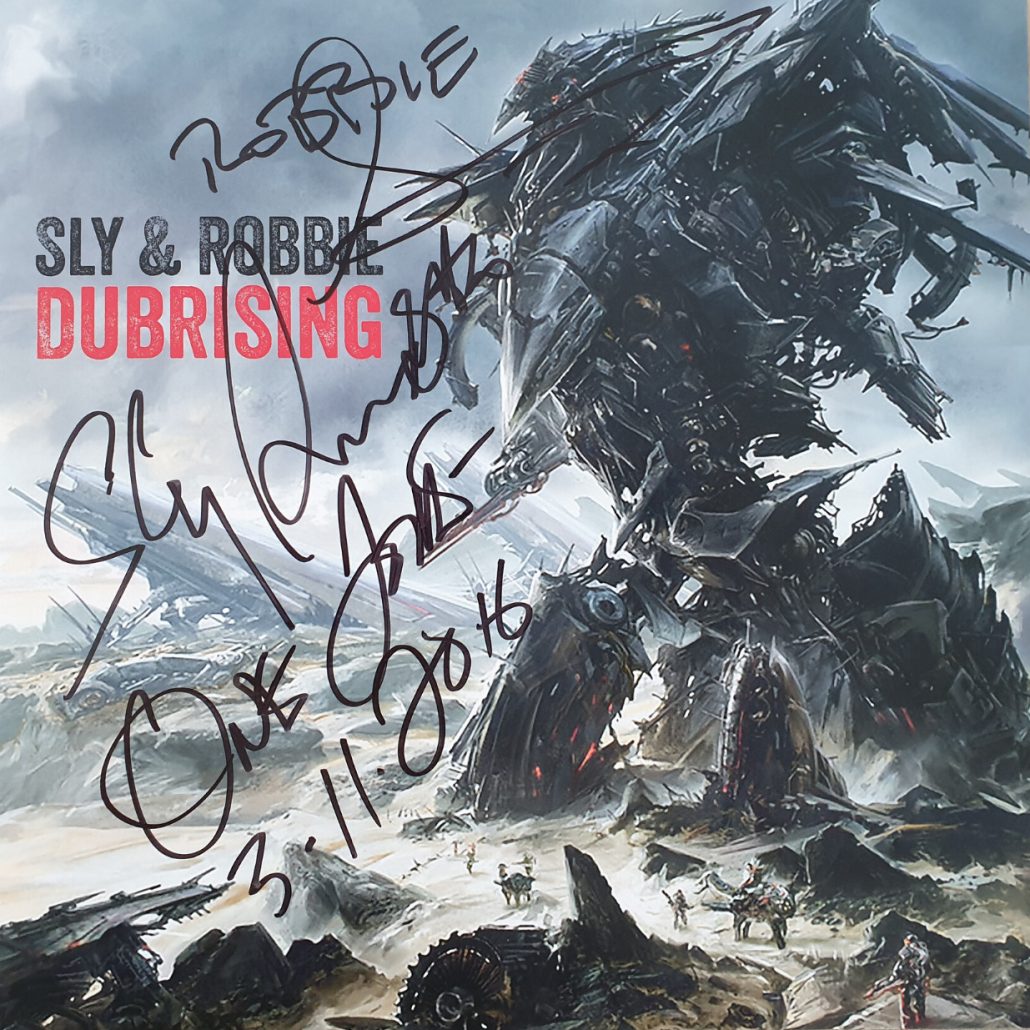 Rhythm twins Sly Dunbar and Robbie Shakespeare have been one of my favorite production duo’s for a long time. They play on so many Reggae albums that I consider bonafide classics. Before forming Sly and Robbie they played for different session bands. Sly in Skin, Flesh and Bones also acting as the support band for Peter Tosh on tour and Robbie in the Aggrovators employed by Bunny Lee. They also played the club circuit offering live music and met in the early seventies. They quickly discovered that they had a lot in common when looking at musical inspiration. But it took some time before they actually started recording together. This happened when they formed the Revolutionaries which was employed as the session band for the Channel One recording studio. After recording the seminal Right Time for the Mighty Diamonds a bond was formed which holds up to this day. 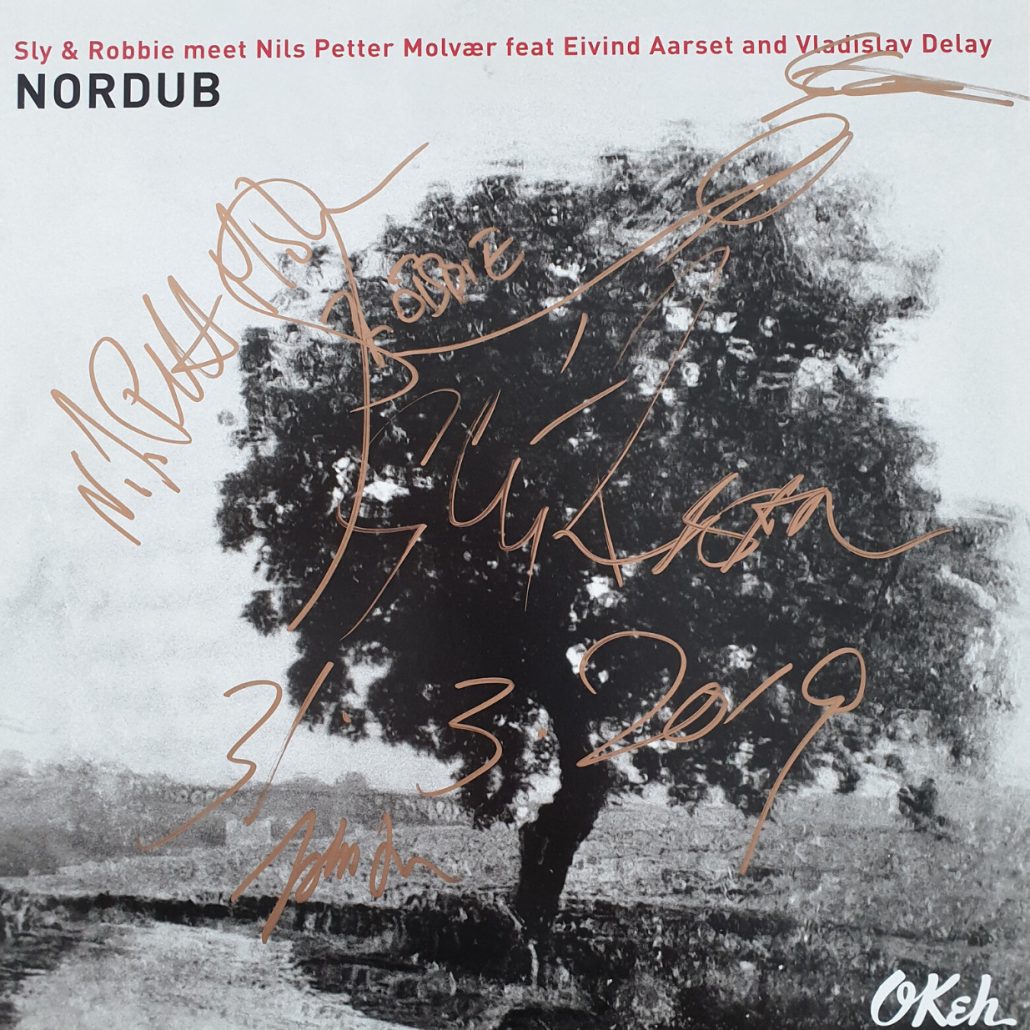 I consider myself lucky that I have seen them playing live three times now and that I was able to go backstage on one of the shows to meet both of them in person. I’ve managed to get two LP’s autographed that I hold in high regard. The first one is Dub Rising on which they rekindle with Paul “Groucho” Smykle who also mixed the Dub masterpiece Raiders Of The Lost Dub back in 1981. The second one fuses the rock solid riddims of Sly and Robbie with experimental Jazz and electronic wizardry provided by Peter Nils Molvaer, Eivind Aarset and Vladislav Delay. 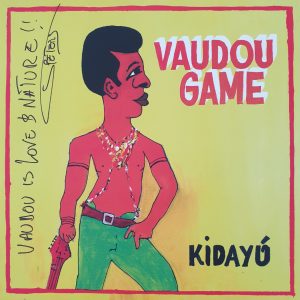 If I’m not mistaken this band still holds the title of most visited live show by yours truly. The first time I saw them was on Metropolis festival some 5 years ago. This festival focusses on talent that hasn’t yet made it big and is one of the fixed festival on my summer schedule. Being one of the first bands to play the festival is always a challenge and the audience had to warm up to the Voodoo Funk. By the end of the show they had everybody dancing and singing along in their best possible Kabiye. I was mesmerized by the drive of front man Peter Solo and the raw funk played by the band. After this show, I have seen about all the live performances by the band on Dutch soil. Peter was so nice to sign the singles and albums I bought and is always up for some small talk after the show. The last show I was part of, Peter introduced a stellar new band with whom he recorded the last album Otodi. They will definitely be back for another show and I can highly recommend buying tickets!

Yola – Walk Through The Fire 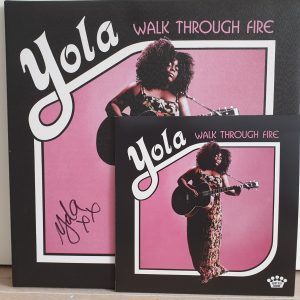 Last year I went to one of the record stores I visit frequently to pick up a new album. When looking around the store I spotted a promotional canvas print of Yola’s than recently released album Walk Through The Fire. To me this album was one of the revelations of 2019 and I asked the cashier what she was planning to do with the print. At first she told me they would still keep it in the store and they could give me a call once it would be replaced. So I wrote down my phone number and paid for the album I came for. Before I turned away to go about my business they changed their mind and gave me the promotional piece there and then.  Not long after that, I bought some tickets to see Yola live and off course I took the promotional piece along to have it signed. The show was magnificent and Yola is such a powerhouse with an aura of positivity. Originally born in Bristol UK she was dubbed as a talent to be reckoned with after performing on Jools Holland’s tv show. But somehow she didn’t manage to capitalize on the appraisals of many music critics. At some point Dan Auerbach who, apart from running the Easy Eye Sound music label, is best known for being the half of The Black Keys heard Yola and was instantly struck by her vocal capabilities. The fusion between Country and Soul has proven to be successful in the past with Ray Charles perhaps as its most prominent exponent. Yola does more than live up to this proven recipe and together with Dan Auerbach creates a masterpiece that deservedly should be named in one breath together with the other masterpieces in this genre. 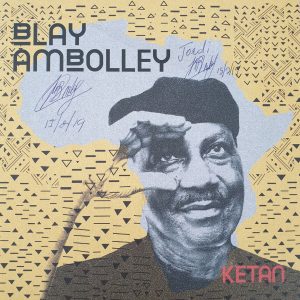 Early 2019 and close to freezing temperatures I rode my bicycle to one of my favorite music venues to see Gyedu-Blay Ambolley and the Sekondi band perform. The night was still young and familiar with the African take on time there was enough room to hang out by the bar first. After a few drinks with my friends enjoying the Afro Beat played by the DJ it became apparent the band was ready. For those who are not familiar with Gyedu-Blay Ambolley’s take on High-Life and Afro Beat, can best familiarize themselves with his signature sound by listening to his debut album Simigwa or his 80’s excursion recently reisued on the Analog Afrika label. For more on this excellent label check out one of my earlier articles. Learning to play guitar on a young age and mentored by the likes of Ebo Taylor, Gyedu-Blay quickly developed his own sound and blasted on the scene with his Simigwa-Do sound. Once the show started the Sekondi band wasted no time to put a spell on everybody in the venue with their infectious groove. The man himself played along with the band at first until he laid down his saxophone to grab the mic with his almost spoken word delivery. His appearance and vocal delivery make him the epiphany of cool. Something which also came natural to the likes of Gregory Isaacs or Miles Davis for instance. The show was something special with an array of musical influences from African traditional to Jazz and Funk so there was never a dull moment. Gyedu-Blay Ambolley and the Sekondi band are coming to play again in Rotterdam on the 14th of November at Grounds. Hopefully there are more people allowed into the venue by then, in safe manner off course! 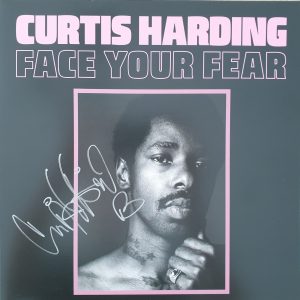 Upon hearing Wednesday Morning Atonement I was instantly converted into a Curtis Harding fan. I remember the morning quite well. After accidently missing a stop on the Tram I had to walk a bit to get some of the finest coffee in town as a gift for a friend. I had just seen the Muscle Shoals documentary and was motivated to listen to more Soul music. Before releasing his own work, Curtis Harding performed as a rapper and background singer for CeeLo Green after which he formed his own band named Night Sun. The band mixed R&B and Garage Rock and you can find traces of this in his own work. The combination isn’t something that came out of thin air. In the late 60’s Soul outfits and Punk had actually more in common that one might think born out of the counterculture. The most influential proto-Punk group was Motor City’s MC5. In turn they influenced numerous Garage Rock bands as there were plenty of R&B bands who put their mark of the further developement of the genre. The two styles incoporated elements of each others music in coming up with new sounds. The music on Face Your Fear speaks volumes on the knowledge Curtis has on classic Soul and R&B. His mother was an Gospel singer who was very active on the circuit. Curtis treats the music with respect but also brings a certain amount of freshness to make it fit in the digital age. The live show I visited was sonically brilliant but Curtis is the kind of artists that does his thing and disappears without a lot of interaction with the audience. So I had to find a roadie to get his autograph together with a friend of mine. In the end it all worked out and I have something to remember the show by! 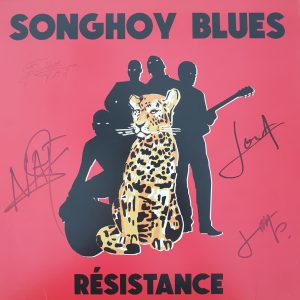 Wow just thinking about the performance gives me such a good feeling. Most of the times when I visit a live show it is with one of my best friends in particular. When I buy tickets I usually buy two knowing that we will probably go together and the rest of the posse changes in size and members. We set out for another night discovering this exciting new band. Songhoy Blues has risen to prominence in the wake of the success that Saharan Desert Blues had in western countries thanks to bands such as Tinariwen. That being said that doesn’t mean the music they create follows that same path. I think that’s a good thing and one of the reasons they stood out. Not that I don’t like the straight up Saharan Desert Blues, but there are plenty of bands that follow in that same tradition. It’s refreshing to hear another take on the genre. There is an abundance of electric guitar noise but instead of taking it easy they seem to attack each song. The album offers quite a bit of change in moods ranging from psychedelic to nostalgic with a punk attitude. 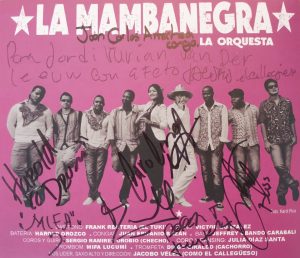 Last but certaintly not least, the album that inspired me to write this article. Dubbed as one of the most promising new bands to come out of Colombia by various magazines. As one of the flag bearers of modern Salsa, they’ve definitely kept their ears to the street incorporating Urban, HipHop, Jamaican and Colombian influences into their 70’s Salsa sound. Next to their refreshing take on Salsa they can rely on a formidable reputation as a live band. Once you’ve seen La Mambanegra perform live it’s hard to resist the sheer energy and tropical charm. Enough said on how I got this album in the intro. It is time to let the music do the talking.