It’s not all about Vinyl 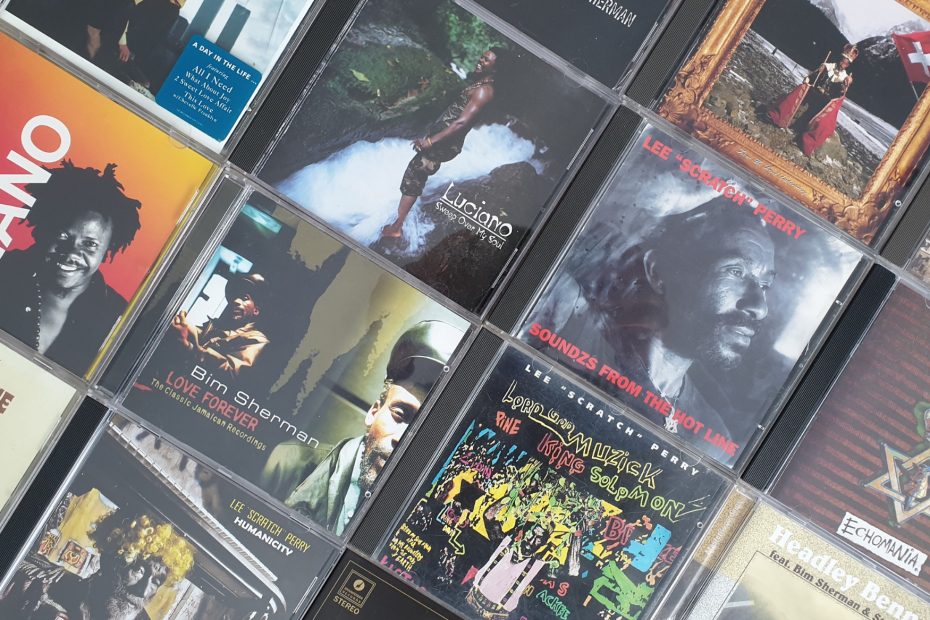 For some time now I had a brand new CD player that was just waiting for me to unpack and install. Normally this would be an easy exercise but I knew what was waiting for me. A while back I reorganized and partly rebuild the furniture piece that holds the entertainment system as well as my HiFi set. After the wrestling match with all the cables I wasn’t too keen on untangling everything in order to install this brand new CD player. Cable management remains a pain in the ass for most audio fans, but there are lots of tricks that make it somewhat easier. Not necessarily more fun though. Saving you from a long and boring story on how I rose to the occasion, I managed to install my CD player and have since enjoyed the advantages of the compact disc. Don’t get me wrong I still favor Vinyl over CD, but I was able to buy multitude of albums that would have easily cost me 10 times more had I bought them on Vinyl. Next to the costs, some albums a far easier to track down on CD than on Vinyl. I won’t go as far as to write a whole article comparing both formats but let’s say that the CD player brought a new dimension to my listening experience. Before showing you what CD’s I bought over the past few weeks, I will be rattling on for one paragraph on why buying CD’s can be an interesting option. For all who are here just solely for the music, you know what to do!

One of the surprises in this digital age is the resurgence of Vinyl sales for already a number of years. There was always a core audience who would never abandon the format but record collecting became mainstream once again. My theory is that digital platforms offer so much music that it’s hard to navigate through and it loses value since it doesn’t require you to take an effort. In this economy, offering an effortless experience is the mainstay for businesses to thrive. Nobody seems to allow themselves any time. So everything that requires an effort is by definition something that’s gets less attention. Look at the growth of food delivery services or delivering groceries at your door step, not saying I don’t enjoy these services, it’s just merely an observation. This economy thrives on taking away every possible hurdle by which you lose contact with the process on how this product came to be and devaluates your perception of it. Maybe a strange comparison, but to me it’s similar to how we are now used to buy meat. It comes prepared in a plastic container, but you lose the connection of how this piece of meat came to be. In the hunger for getting something that feels real, Vinyl filled in a gap because it is something people can relate to in a physical sense and brought back the connection of something that you cherish. That doesn’t mean people will ditch their subscription to Spotify and will buy everything they listen to on Vinyl, CD or Cassette but for some things in general that you really like it appears to mean something to have it in a physical form. To get back on topic, the comeback of Vinyl had an effect on other physical formats as well. The CD followed soon after and later Cassettes also rose in popularity. Among the differences between the these formats, the growth in price is what mainly stood out. Prices of Vinyl have seen an increase of more than 400% over the last couple of years, something which hasn’t gone unnoticed. This has something to do with the amount of records available and the minimal resources left to press Vinyl, but also because people make good money off of it. It is really mind boggling to see the amount of reissues being released in a limited amount on purple Vinyl with absolutely no added value in the sense of bonus material or a thorough remastering. It’s exactly the same album that sits in the 5 euro bin on the second floor where you need to push aside a few boxes. It isn’t all for the sake of money making, some albums have become so rare and expensive that a reissue is the only option. The Covid-19 situation also had a profound effect on driving up the sales even further. The amount of free time people have increased as working from home is the norm for most people, especially for those who work in an office, which are also the people who on average have more to spend on music. With more time on your hands and no drop in earnings, the sales of physical formats is steadily growing. However the growth in price of the CD isn’t as strong as for Vinyl which makes it a very interesting option for serious music collectors before the mainstream will follow and drive prices up. Haven’t lost you yet? Still here?? Then I can recommend reading for instance the annual reports by Discogs to really dig in deep! 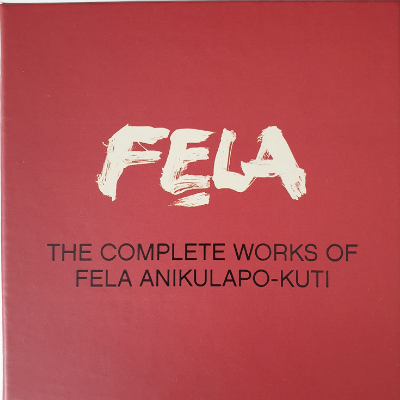 As a big fan of African music, I feel that I have to own at least have some records by Fela Kuti. I have been on the lookout for quite some time to score some Vinyl records of Fela Kuti and even offered quite some money on various auction sites. They are just so damn expensive, especially if you are a sucker for the original Nigerian press. So why not buy the whole collection on CD? I wouldn’t have come to that conclusion if it wasn’t for a friend who sent me a link to Amazon Italy where you could buy the whole collection for a measly 60 euros. I’m not sure it’s still available and you have to struggle your way through the Amazon process in Italian, but the reward is worth the effort. The collection features 29 CD’s with all the albums with the Afrika 70 and Egypt 80 as well as live albums, bonus material and a DVD. It is housed in a sturdy box and all the CD’s feature the original cover art, either on the front or back. 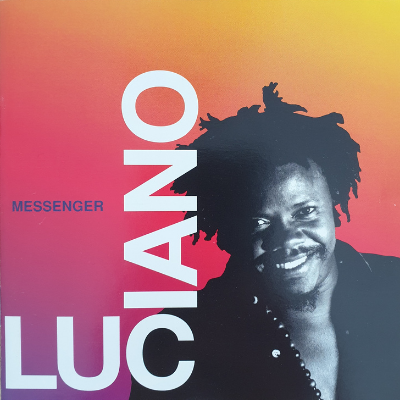 Luciano – Messenger and Sweep Over My Soul

Reggae or music in general produced and released during the nineties was predominantly released on CD rather than Vinyl. Hence, it is far easier to track down these CD’s than an obscure Vinyl release from the 90’s. I always liked Luciano with his soprano voice and his positive take on life. Luciano, who was born as Jephter McClymont, started singing as a youngster in the church choir. Outside the devoted Christian household where he grew up in, local artists such as Dennis Brown started making an impact on the young Jephter. Soon he was mixing in popular Reggae tunes while singing in the church. The church wasn’t receptive to this new Rastafarian inspired music and after a while Luciano decided to part way from the church and channel his energy on making Reggae music without restrictions. Luciano’s take on life didn’t change and he remained the positive youth he has always been. Forging a friendship with producer Philip “Fattis” Burrel resulted in some of his most profound work and Messenger is a prime example of this alliance. The album moves in multiple directions in terms of 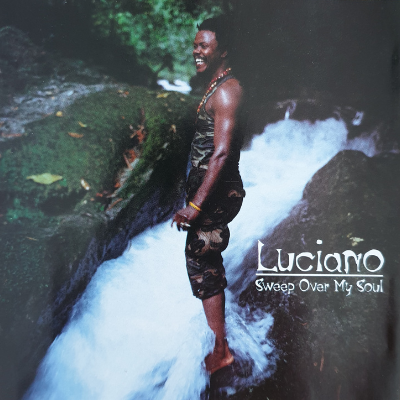 mood and musical style, which makes it a very energetic listen. Philip “Fattis” Burrel is very sensitive to the undercurrent of every style and the band feels at home with everything the producer throws at them. Sweep Over My Soul may be less familiar but it still remains one of the cornerstones in Luciano career. On this second instalment for Island Records, Luciano stays close to himself and is fueled with his spiritual devotion. The musical arrangement may be less surprising but it is the coherence that makes this album stand out. Luciano has a lot more to offer and if you like these albums, be sure to check his discography for more. Reggaeville’s festival magazine features an interview with Luciano after the release of his latest album The Answer. 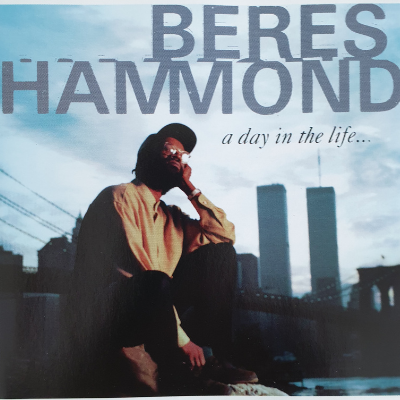 Beres Hammond – A Day In The Life…

Beres Hammond is mostly associated with Lovers Rock, a genre he helped push all the way into the 21th century. There has been multiple artists who helped shape the genre dating from the late 60’s before it went big in the UK but there hasn’t been one artist so consistent helping to keep in genre alive. Beres was able to reinvent himself through the ages to speak to each generation. On this set he absolutely knocks every song out of the park. Beres is in the producer seat for most of the record and features the well-known gentle swaying ambience but also boosts more Dancehall appeal compared to its predecessor. The lush orchestration on most of Beres Hammonds records forces the rhythm section to operate in the shadows but on this record the drum and bass are clearly put in the spotlight. Production is super clear on all levels and incorporates both live instrumentation as well as digitally produced rhythms with a drum computer. Any album featuring such a smash hit as “Can You Play Some More” deserves to sit in your collection. 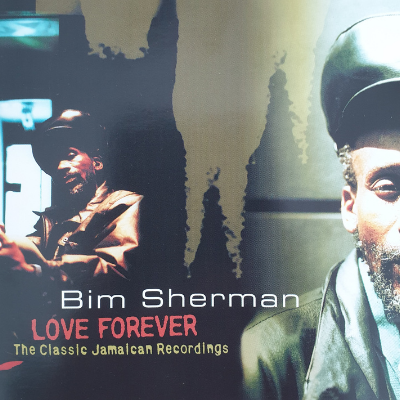 Throughout his career Bim Sherman remained fairly unknown, overshadowed by other artists in the fierce Jamaican record industry. Maybe Bim’s firm belief in his own creative process and coming up with original compositions by himself made him somewhat numb for local trends. Even though the reward was thin in terms of recognition from a broad audience, it was paid in full with adoration from a small dedicated following. His thin voice, unique approach in his lyrics and the composition of most of his work contribute to an overall ethereal atmosphere. Love Forever collects his best work from his early career before moving to the U.K. following his life-time friend and drummer Style Scott. 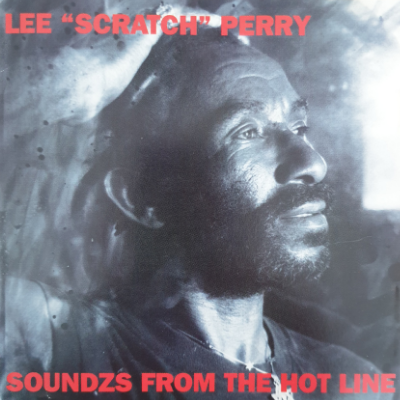 With the Black Ark up in flames, the unique sound of this studio was also burnt to ashes. Not so much because of the studio possessing some kind of magic, but the state Lee Perry was in to create some of his masterpieces had become too toxic. Soon after, Lee Perry spiraled for quite some time releasing some bizarre albums before he was able to find peace with himself. The release of Soundzs From The Hotline more than 20 years later came unannounced. The liner notes didn’t give a lot to go on apart from the fact that the master tapes are licensed by Alvin Ranglin. Perry must have given the master tapes to Alvin as a down payment for a loan and never reclaimed them. Like a time capsule, the album is compiled mostly out of unreleased Black Ark rhythm tracks with new vocals and effects. Lee Perry even returns to his short lived alter ego “Pipecock Jackxon” from the early 80’s when on a doomed mission to rebuild the Black Ark. The album is stuffed with traces of some of his most memorable work throughout his early career, from the pre-ark Beat Down Babylon album, a new take on the sound system favorite “Vibrate On”, to the extended marvel “Free Up The Prisoners”.