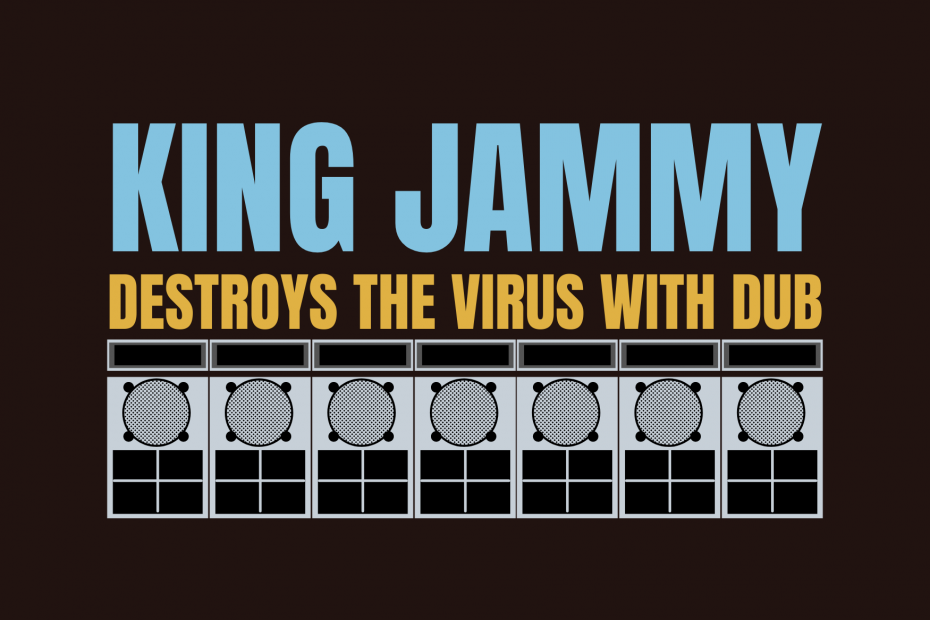 King Jammy once again found his way to the mixing board, this time to destroy the virus that has been plaguing us for the last two years with Dub. In this series, I look at the cover art primarily before moving on to briefly comment about the music hidden within the grooves. The cover of this album takes us back to the early to mid-eighties following the illustrations by inhouse designer for Greensleeves, Tony McDermott who’s talents are once again called upon for King Jammy Destroys The Virus With Dub. The playfullness of the illustration here speaks volumes on the freedom of interpretation when it comes to Dub music. Tony became something of a cult hero creating many jaw dropping album covers like Scientist Wins The World Cup. These pieces of art speak to the imagination more so than most record covers and pair nicely with the characteristics of Dub music. Many of these covers are out of print for years and the originals have become well sought after collectors items. King Jammy Destroys The Virus With Dub comes with a giant poster of the cover design which wouldn’t look out of place on the wall next to your Dub records.

On the music itself, it is like stepping back in time as well. For this project, King Jammy went through his immense back catalogue and handpicked a total of 12 classic master tracks to deconstruct and build from the ground up. Rhythms that will take you back to some major hits by artists like Black Uhuru, Barry Brown, Sugar Minott, Frankie Paul and Gregory Isaacs. It’s a mixed bag of 70’s, 80’s and even 90’s material varying from Roots to Dancehall which makes it a very pleasant listen not staying in one area for too long. All tracks are mixed live as was the standard in the 70’s and make up for a spontaneous soundscape where reverb, echo and phasing fly in and out of the mix without any warning. The rhythm tracks of Lacksley Castell’s “Black Sheep” as well as Hugh Mundell’s “Jah Fire Will Be Burning” from their blazing collaboration album are featured as “Track & Trace Dub” and “Lockdown Dub” respectively. Closing the album in fine style with a tribute to all the hospital workers with Junior Delgado’s raspy voice. The mixes are outstanding, creative and bring a whole new perspective to these tracks or introduce a whole new audience to some of King Jammy’s most celebrated rhythms tracks.