Record hunting in the U.S. 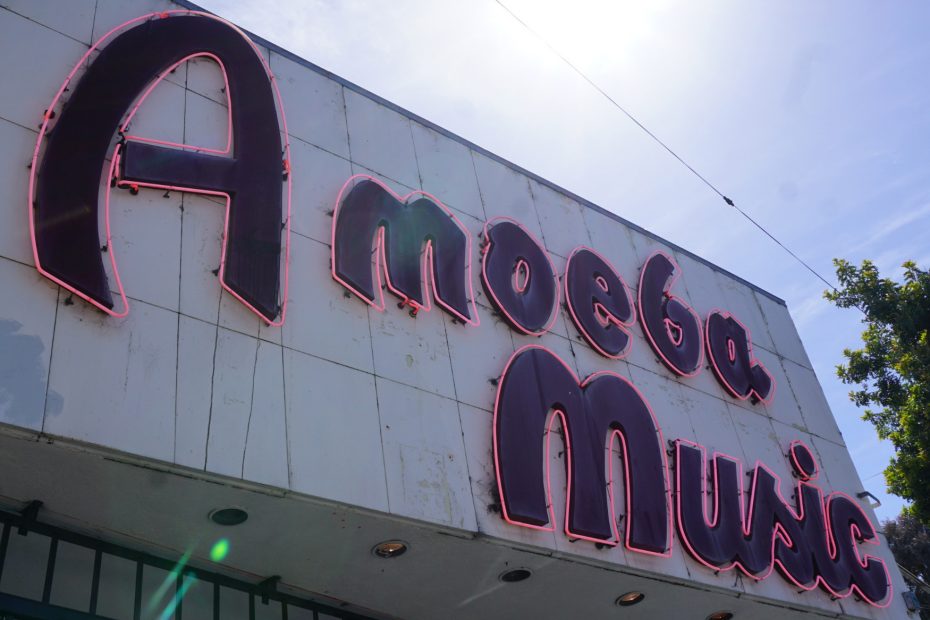 After crash landing on my couch this weekend, I started reminiscing about an adventurous trip we took to discover the west coast of the United States. We travelled from San Francisco inwards towards Las Vegas, continued south with a stop in San Diego before going back up to end the trip in Los Angeles. Most of the trip was focused on visiting the many stunning wild parks scattered around these places with no record stores in sight for miles. So whenever we hit civilization again, I tried to squeeze in as much time as possible to buy some records. Record hunting in the U.S. is a whole different experience from my adventure in Japan and closer to how I am used to buying records in the Netherlands. Even though the similarities, I found that it’s worth taking the following in consideration when going record hunting in the U.S.

Let’s waist no more time and look at some of the records I was able to buy on this trip!

Knowing we would start our trip in San Francisco, there was one record store on my mind even before we boarded the plane. Amoeba Records is the biggest independent record chain in the U.S. with stores in Berkeley, Hollywood, Los Angeles and San Francisco. Having read about this record heaven got me excited but also weary that I would buy a lot of records that I had to carry with me from the start. Walking around the neighborhood where Amoeba Records San Francisco is situated is an experience on its own. With a rich history in music, the Bay Area brought forward many well-known bands from the Psychedelic music scene such as Grateful Dead,  Sly & The Family Stone, Jefferson Airplane, Big Brother & Holding Company just to name a few. Traces of their presence still can be felt if you stroll through the neighborhood with its characteristic houses painted in vibrant colors and graffiti art on the walls.

Las Vegas was something different entirely and I wouldn’t recommend it when you just found your inner peace at one of the serene wildlife parks that surrounds the area. For me it was a bit too much, but I might not have given the desert city a fair chance and only stayed for a few days. Next to that, I’m not an avid gambler and rather spend my money on vinyl than on chips. When doing laundry at a local wash and dry we had some time to kill. I had already spotted a record store along the way and sneaked out leaving my wife to guard our clothes. Going through the door I found a neatly stacked record store covering a wide range of genres. Going through the Soul section already consumed quite a bit of time. I came across Victim Of The Joke?…An Opera by David Porter. Being a fan of David Porter’s work as songwriter for other artists in the Stax days made me hold on to this. I started doing some research on my phone because listening to the record would surely take too much time. When I looked up, I already ran out of time and let the record slip. If I was better prepared with a clear list of records easy to obtain in the US I probably walked out with more than one record. Luckily enough, the record I managed to purchase was one of my favorite Soul albums which coincedently features a song written by David Porter. So in the end it was definitely worth sneaking out.

If I had to choose a favorite record store among of the record stores I visited in the States, Folk Arts Rare Records would undoubtedly be on the top of that list. At first it didn’t seem that this record would even make the list, since after knocking on the door multiple times, no-one seemed to be present. I was convinced it was within opening hours as I checked their website or did I? There was somebody else waiting, but he seemed to give up after a while with the sad look of bitter disappointment on his face. Walking back to the car I decided to see if I could find any contact information online and soon after I found a cell number. After the call tone rang a couple of times someone picked up with loud music in the background. It happened that the owner closed earlier to visited a local festival. Who could blame him, I problably would have done exactly the same. I explained that I came all the way from the Netherlands and he made it back to the store just for me. Apart from the fact that it felt I was getting private access to the store, the owner was a very friendly and knowledgeable music fan who was very helpful pointing out some records that I otherwise would never even have considered. So we chatted the whole time while I was going through the bins and he put on record after record so I could get a taste of what he suggested. I ended up leaving with a stack of records, both suggestions and some major finds of my wantlist, which to this day I still play with great pleasure.

I remember this night quite vividly. I sat behind the wheel at 7 and it took me 20 minutes to arrive and park the car in the almost empty indoor parking lot. I had to find the garage entrance to the store as it was tucked away plastered with band stickers and graffiti. Once at the top of the stairs I was in awe with looking at all the fully stacked records bins as far as my eyes could see. I spent almost 3 glorious hours of browsing the bins after which I went through my selection to decide what to bring home with me. Even if I wasn’t able to score an immensely rare record I was quite satisfied with the loot. I was particularly happy with Reggae In America by Lion Zion which is very hard to come by in Europe. This is one of the oddities in Lee Perry’s immense work as producer that was still missing in my collection.

I managed to squeeze in another record shop before leaving. The haste in which I tried to add another record store to my trip couldn’t be more different from the laidback atmosphere in the store. Record Surplus is a big record store were you can easily spent a few hours but I had to make due with just 30 to 45 minutes before we had to leave. The store had some listening booths were you could sit back and take your time looking and listening to what you had just found. It didn’t take long for me to find some records but ultimately I ended up only buying two. I left Brent Dowe’s Build Me Up and Soul Synidcate’s Was, Is & Always behind as I was not convinced enough. The album that I didn’t had any questions on buying, was an original pristine copy of Blackheart Man by Bunny Wailer still in its 1976 plastic wrapper which had never been opened. A stunning piece of work that holds up to the best work Bunny had created together with Bob Marley and Peter Tosh in the days of The Wailers. To the Reggae community’s grief, Bunny Wailer passed away just last week on the 2nd of March as the sole survivor of the three. He continued to be an important Rastafarian role model throughout his life. His musical output maybe not as prolific as in the 70’s, but he continued carrying the torch and kept the fire roaring setting an example for the new generation. To all Reggae fans Blackheart Man will surely be no mystery, but for all those unfamiliar with it I strongly encourage you to set foot in the mystical realms of the Blackheart Man.

2 thoughts on “Record hunting in the U.S.”