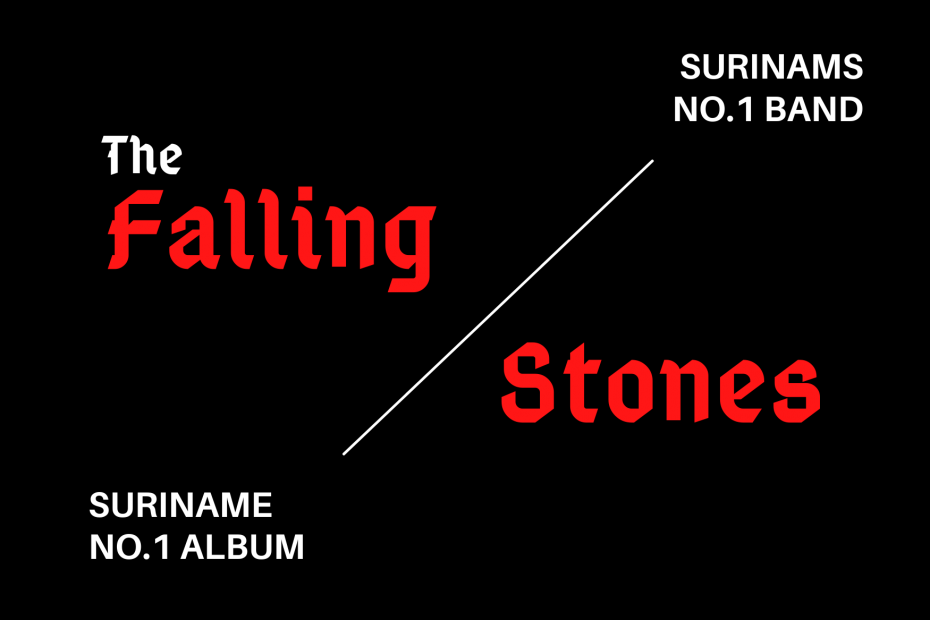 Last year I bought some books about Soul music to broaden my knowledge of the genre. Soul music has always intrigued me but my knowledge didn’t surpass the well-known artists and albums. The books I read are part of a trilogy focusing on Detroit, Memphis and Harlem as melting pots to produce some of the most enduring Soul music ever. Stuart Cosgrove – the writer of the books – didn’t only concern himself with the music produced in those cities but the whole atmosphere such as the cultural, political and economic developments during the late sixties. I’m not the type of person who can spend a whole day just reading a book. So in between reading, my mind starts to question itself on certain things I just read (one of the reasons I can’t read a whole day). With my phone always at arm’s length distance, I started to do some online research. After spending some time browsing, I found something worth further investigation. Surinam’s best kept Soul secret: The Falling Stones. They released only one album during the 70’s before they broke up and it happens to be a fantastic album. It has been released on vinyl solely and is kind a hard to get by but totally worth every euro. Underneath you can read my song by song review, enjoy!

Their music isn’t available on Spotify so at first I had to do with the songs that where available on YouTube before buying the LP. But boy, did they take me by surprise even considering the quality of music on YouTube. The first song is my favorite on the album and possibly one of my favorites in the genre. It has everything you can possible desire. It’s starts off with a straight forward drum pattern soon followed by an eerie organ and trumpet in order to build up tension before suddenly bringing it all down to nothing. This is followed by the rhythm guitar and some light cymbal strokes before the organ and trumpet make their reappearance. The mood is dark and singer Henry Cumberbatch further enhances this by stretching each note. Towards the chorus the horns and organ play a vital role in briefly overcoming this dark mood which gives the song a very melancholic and psychedelic feel. The musicians know exactly when to hold back and when to give the song something extra. This enables Henry Cumberbatch to take center stage in much of the song but leave enough room for the musicians to make it their own. It’s an original composition from the band and a testament to the bands ability to come up with original material all of their own.

Come back to your lover

The second song kicks off in the same melancholic vein as the first. But when the singer starts to belt you instantly hear someone else singing whose voice closely resembles the late great Otis Redding. It’s because this close resemblance that Louis Windzak quickly gained status as the Otis Redding from Surinam. Throughout the album you will hear both singers taking on existing and original material. Again the instruments play an intricate role in creating an atmosphere of melancholy. Especially the horns at the end of the first chorus underpin the lyrics of longing for a lost lover. Although the song is much shorter that the first song and the music is more straight forward it’s still a solid effort which is perfectly situated among the other songs on the album.

Opening an album with two solid songs can be a massive let down if the rest of the album can’t keep up momentum. Denver is originally written by Dan Penn and Spooner Oldham. Two musicians with Southern American roots and a great legacy in Soul music. Denver sits right between Soul and Country and even though the Falling Stones take it upon themselves to execute the song as a fully-fledged Soul version you can still notice the country influence. The singing or almost crooning really sooths the song and stipulates the easy listening mood of early 60’s soul. At first I had to get used to the change of style. But Denver gets better every time you listen to it and plays a crucial role in offering a break from the heavy mood set by the first two songs. Denver is a guitar driven song and the bass and the rhythm guitar are at the forefront of the mix. The horns and organ provide the lush melody and take the song further into Soul territory.

Back To My People

Another one of the four original compositions on the album has Louis Windzak on vocals. Back To My People relies heavily on the rhythm section interspersed by the horn section and some funky guitar licks. The song is clearly influenced by Funk music which made a huge impact during the 60’s and changed the sound of R&B. The song has an upbeat structure and is riff orientated with a clear syncopation between the drum and bass. The lyrics are sung almost in a call and response manor mostly associated with a Baptist church choir. But this call and response way of singing predates the Baptist church by many years. Most Sub-Saharan African tribes use this way of singing and it is deeply rooted in their culture.

Just like the original by Santana the emphasizes here is on the guitar and organ. Only the bongo’s are left out compared to the original instead using the toms on the drumkit. The guitar riff provides a steady melody to hold on throughout the song only to be drowned out by organ when the song reaches its peak. Although the band stays close to the original they show that they more than capable to interpret different styles.

Off course this massive genre defining song written by Harry M. Wood, Jimmy Campbell and Reginald Connelly and covered by almost all the big names from Frank Sinatra to Aretha Franklin couldn’t be left out. Falling Stones do a very good job honoring the original song structure and with Louis Windzak as singer one can’t help to think of the late great Otis Redding. Throughout most of the song Louis is only supported by light strokes of the drummer and the organ. Halfway through the song the horn section joins in to drive the song to its pinnacle with Louis singing his guts out.

Got To Be Mellow

The flipside of the record starts with the easy breeze that is Got To Be Mellow. Originally written and performed by Leon Haywood in 1967. The Falling Stones look for inspiration by cultivating the Soul sounds that were coming out of California during the 60’s. A time when multiple artist scored hit after hit while developing a sound referred to as Beach Music. The song has an up-tempo beat along with uplifting lyrics and backing vocals providing a soothing quality. Once again the melody is driven by the organ accompanied by the lead guitar. The drums are played in an easy going fashion. Most noticeable are the snare drums during the couplet coupled with the rhythm guitar and the hi-hat during the choruses. All the other instruments are being played in a gently manor including the short sax solo which constitutes to the overall laid back feeling of the song. This song will make you sing along in no time.

I’ve been A Fool For You

This deep Soul ballad originally took shape as a proto-soul song and was written by Ray Charles. The traces of blues are thus more than apparent but given a personal interpretation by The Falling Stones. The guitarwork has a prominent role together with the organ. The horns only come up close to the chorus. At the end of the song each individual element is brought together in unison. This is where the Falling Stones instrumental prowess shines bright.

Got To Make A Comeback

The next song is also a cover that is originally written by Eddie Floyd and Joe Shamwell in 1967. Both worked at Stax Records writing, arranging and singing on multiple hits. The formidable horn section sets the mood before Henry Cumberbatch starts this fine ballad. The Falling Stones take the song into a new direction compared to the original. So although this is a cover there’s more than enough variation within the lyrics and the composition to make it sound different. Listening to the original I couldn’t help to notice that the Falling Stones version feels far more sincere than the original. Next to the way Henry Cumberbatch is able to make it his own, the music on the original sounds a bit flat and dull compared to the version by The Falling Stones. Enough of my own preferences and find out yourself.

I’ve Been Loving You Too Long

Another classic from the one and only Otis Redding only signals how much influence he had on the Falling Stones. There isn’t much to say because the Falling Stones stay true to the original composition only that they took pride in honoring such a classic with an excellent execution.

All In The Game

All In The Game is a 50’s Pop song based on a composition called Melody In A Major. This song is covered throughout most of the 60’s by many household names and has become a Pop classic. The song helped to revive the career of Tommy Edwards whose version remains the most popular one. As expected the Falling Stones do a soulful rendition of the song much like The Four Tops did in 1970.

The Falling Stones reveal their roots at the end of the record. The last song sits firmly in Kaseko tradition a music genre developed in Surinam during the early 1900’s. This music genre is heavily influenced by New Orleans Jazz, Latin and Calypso but started as remnants of African traditional music brought by the first slaves taken to Surinam. No vocals here, but purely instrumentals as the band gets the opportunity to show what they got. The word Kaseko is a degeneration of the French “casser les corps” which roughly translates to “ferociously smash away”. The band takes this to heart as they lay down the groove with lots of percussion. A very pleasant song and a refreshing break from the more serious matters.

In their time The Falling Stones where anything but Surinam’s best kept Soul secret and even gained some success in the United States. They were one of the first bands to record outside Surinam. This album is recorded in Trinidad at the Caribbean Sound Studios who at that time was one a the most famous recording studios in the Caribbean. The fact that the majority of the 12 songs are covers isn’t a let down because the Falling Stones execution is spot-on, their interpretation offers something fresh and their original material stand proud among the covers of some of the most enduring songs in Soul history. What I love about this album is the variety of different styles. This is something other soul albums often lack because they reflect a specific period in time. This albums offers anything from beach music to psychedelic soul.

If you are interested to learn more about how the Soul genre developed during the late 60’s I can highly recommend these books or read any of my other Soul related articles.