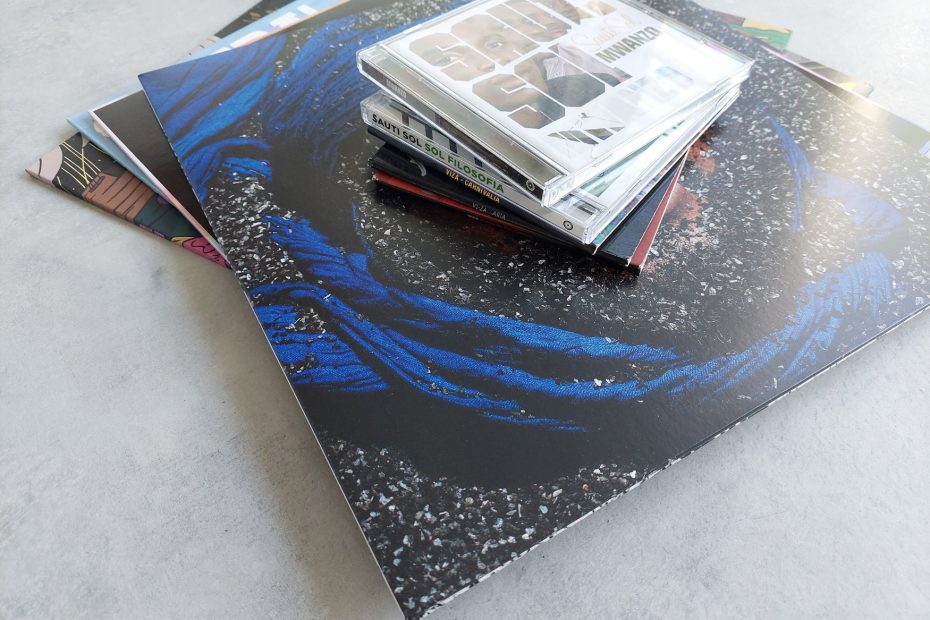 Some time has passed since I listened to Sauti Sol along with some other albums from my time as an intern working for the UpTooYouToo foundation. Early in their career, Sauti Sol decided to join the Penya Africa label which resulted in two stunning albums. Penya Africa as a music label focused moslty on emerging African acts as the name suggests and was closely related to the UpTooYouToo foundation. I got to meet the band in person multiple times during this internship and have fond memories of one of their live performances at Bitterzoet, Amsterdam. My tasks as an intern had nothing to do with music whatsoever, but more with creating an idea to raise micro-budget for youth initiatives in Kenya. I’m glad that I got to experience the music affiliation of the foundation as a bonus. I had plenty of time talking to the individual members and they all signed both albums. Unfortunaly the first one took out the booklet and signed the second page instead of the front and by doing so setting an example for the others to follow. I was already happy talking to them and seeing them perform so I didn’t dare ask them to do it over again. Sauti Sol made quite a name for themselves being nominated and winning several international awards next to receiving accolades from the international music community. They continue to release new music to this day. Their newest efforts Afrikan Sauce and Midnight Train moving away from the acoustic sound of Mwanzo and Sol Filosofia towards a more contemporary international Pop and R&B affiliated sound.

My first introduction to miss Holly Cook was via the exquisite Hollie Cook in Dub produced and mixed by Prince Fatty who I had been following closely for a while. The album got a lot of airplay everywhere I went and people responded with the same enthusiasm I had for this wicked Dub set. It was only after I played the album all through the fifth grade, that I started to listen to the vocal counterpart. Already familiar with the rhythms, it was easy to warm up to Hollie Cook’s debut album with her sweet soothing voice. Not long after, her second album was released, again with Prince Fatty as producer and it resulted in another outstanding set. Still very much rooted in Reggae, Twice features a different sound exploring her Caribbean roots, adding lots of strings and a more danceable sensibility. For her third album Vessel Of Love, Hollie Cook decided to exploit her tropical blend even further teaming up with a different producer. This resulted in a even more fuzzy soundscape laden with synths while Hollie Cook’s enchating voice keeps you under her spell. I managed to get some tickets for one of her shows promoting Vessel Of Love. Holly Cook is as adorable and a tad shy in real life as one might come to expect after seeing her on stage. She took her time signing the album straight after the show while we exchanged some small talk about her performance. Some great memories immortalized by an golden colored marker adding yet another fine example to this list of autographed album covers part 2. 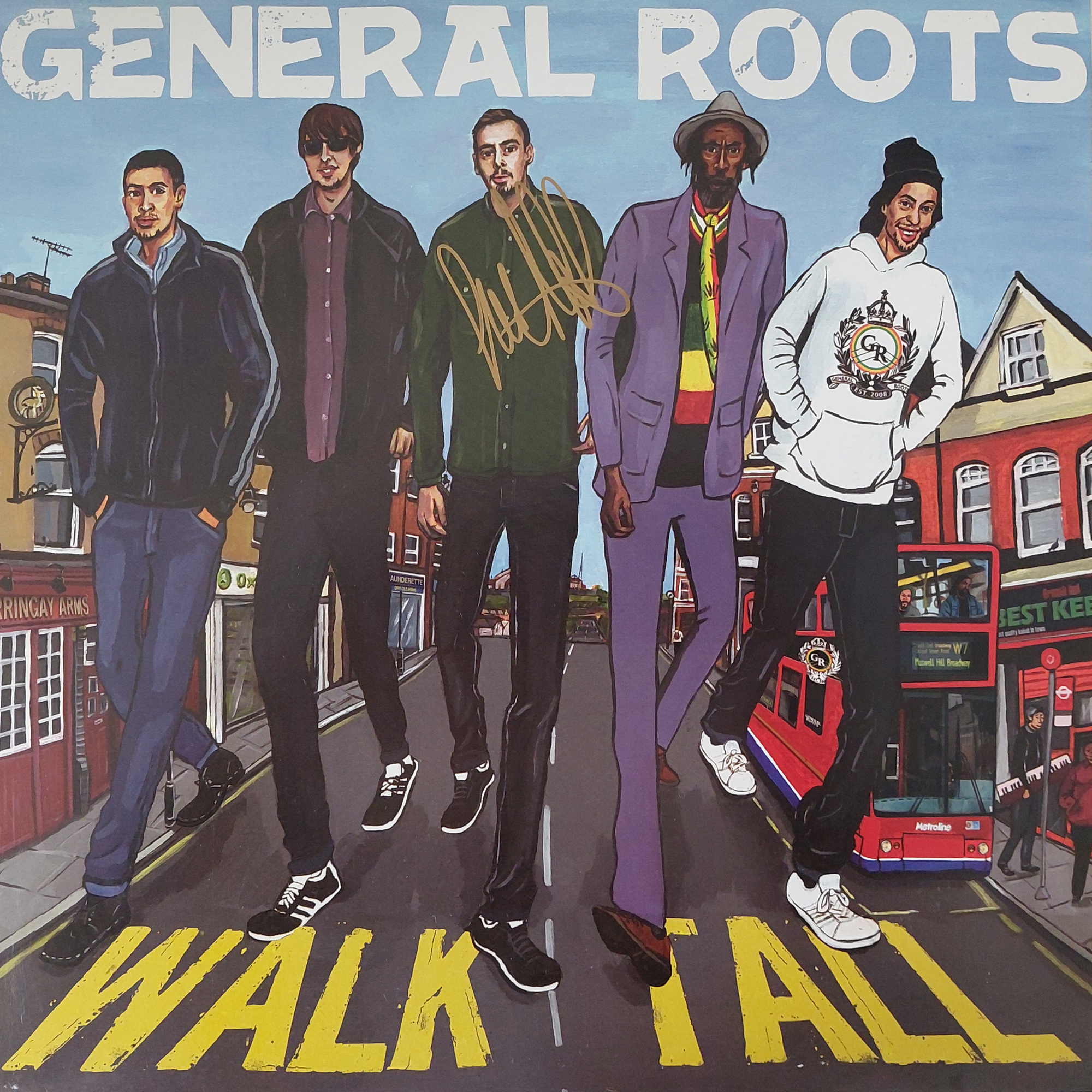 Joining Holly Cook on tour both as support act and support band in order to get their name out to an audience that probably never heard of General Roots before. They’ve put together a nice show with the energy of a young pack of wolves out there to prove their worth. None other than legend Dennis Bovell joined the stage for the co-written “Raver’s Delight” which was definitely the highpoint of the show. Walk Tall was put together with the help of the same Dennis Bovell and Prince Fatty. With so much musicality and experience lending their talents to this project it was bound to feature some outstanding tracks. Just listen to “Special“, “Out Of Love“, the before mentioned “Raver’s Delight” and a cover of Junior Delahaye marvelous “Movie Show” featuring Horseman.

VIZA – Carnavalia, Aria and Made In Chernobyl

Definitely the oddball amongst this bunch. I got to see VIZA play in the Melkweg Amsterdam years ago. My brothers asked me to tag along as they had seen the band as support act to an Japanese Metal band I have forgotten the name of. So have they, because VIZA absolutely smashed the place and made an unforgettable impression. Exactly so was their performance when stepping out of the light for a full show of their own. Hitting the stage like a ball of fire setting the whole room ablaze as their theatrical showmanship took everyone by suprise. It came so natural to them and they portrayed it so convincingly that I was absolutely absorbed. From the bottle of wine so nonchalantly consumed in-between an instrumental break after which it was so elegantly placed on a Middle Eastern carpet to the dim stage lighting depicting the inside of a shady local watering hole. At some point during the show, I took a break from the mosh pit to take a breather while someone was leaning on me to the point that I had to shake him off. I only discovered it was the lead singer after I pushed him back in the mosh pit and can still picture the image off him bouncing into my friend who was still going at it. The signing of all three CD’s that I had bought on the spot was just as choatic as the show, running around the venue like a crazy person playing where’s Waldo with the bandmembers. As you can guess, I missed a few autographes but that’s all in the game. There is still no band that can fill the same headspace for me quite like VIZA does as they have come to call it home. I can still listen to all three records as an infinite loop and grin from cheek to cheek the whole way through. It might be nostalgia talking, but you should definitely give it a go.

Back in 2018, I got to listen to Feng Suave for the first time at Metropolis festival. Going through the line-up while in prep mode, they were quickly added to my shortlist of bands to look out for. They delivered on the promise for a full hundred precent. Soon after, they dropped their debut EP. All pre-orders were send out with an autograph by both Daniel and Daniel as an extra bonus, but the real treat comes when you drop the needle. Deadly quiet and incredible dynamics, Feng Suave did right by its audience who can fully enjoy the lucid bedroom soul chock-full of character. The only downside is that they leave you begging for more after just four tracks and the autographs were placed on the all-white inner sleeve making it technically not an autographed album cover, but let’s not get into semantics. With two more recent EP’s under their belt they show no sign of stopping and experimenting. So, it is a waiting game before the next release. Luckily their first three releases will keep you more than satisfied at least for a while.

With the whole Desert Blues craze of the last ten to fifteen years, perhaps making somewhat of a resurgence with last year’s release of Mdou Moctar’s Afrique Victime, I had the chance to witness some of the action up close. Among the names I have had the pleasure to see play in the heat of the moment are Tinariwen, Songhoy Blues, Mdou Moctar and Kel Assouf. The last name might be less familiar than some of the others, but based on the music should be mentioned in the same breath. Playing a three man show it was great to see that they could fill the space with so much sound. The electric guitar obviously stealing the show but hand drumming for an entire show is worth noting as well. Next to me stood another fan that apparently knew the Tamasheq lyrics by heart. We chatted at the end of the show where he explained me some of the protest songs lyrics which often reflects the experiences they had having numerous extremist groups sowing death and destruction on the lands the once called home. After the show we expressed our enthusiasm about the show to Kel Assouf after which he gladly signed our copy of Black Tenere.