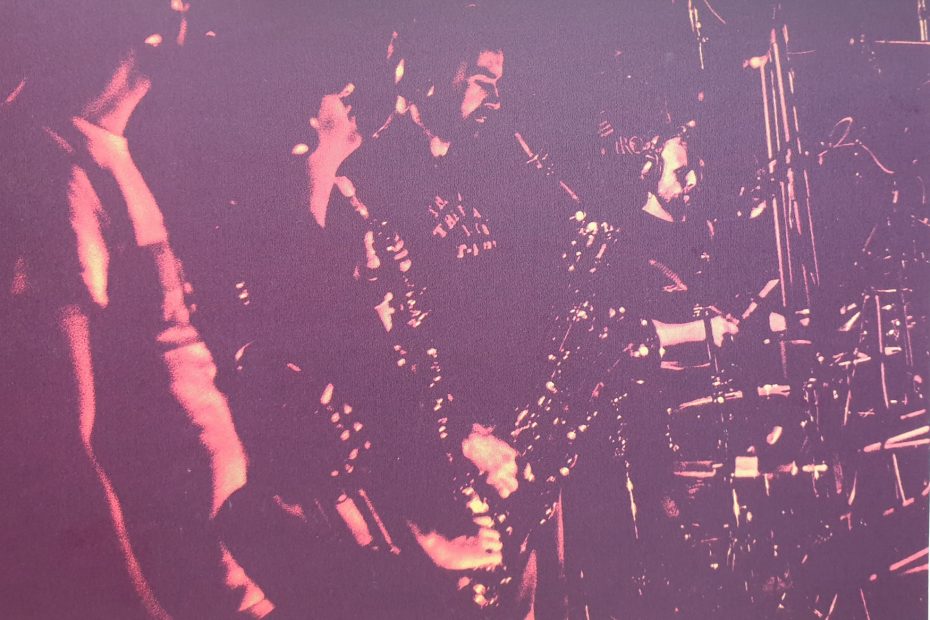 Going through some photo’s on my phone, initially to free up some storage, I came across some photos taken in 2019 during a festival called Nacht van de Kaap. I remembered researching some of the bands that were to hit the stage before going, which to me is half of the experience. After looking at some photo’s I took that day, I remembered that I bought a CD there from Evil Empire Orchestra who’s performance made quite an impression on me. I got the CD signed of course but you have to have a little bit of patience for part 2 on autographed album covers.

The festival started somewhere in the early afternoon and I was one of the first to arrive since I wanted to see a band who had the ungrateful task of opening the festival. Kosmo Sound opened, playing a combination of  Reggae, Dub and Jazz in a tent that was completely empty except for me. The sight must have been far worst for them, seeing this one guy with a beer clapping and cheering after each song. They were good sports, understanding the trails and tribulations they had to go through in order to move up the ranks. Halfway during the performance my friends arrived and slowly the tent started to get more crowded. We chatted with the band afterwards before heading out to the next performance. Some of the other performances that have taken firm root in my recollection were by Certain Animals and the London Afrobeat Collective. However Evil Empire Orchestra really took the cake in my experience with a blazing performance, playing material from their debut album as well as some new material.

I went through my CD’s and quickly found the album, put the volume up, and rekindled with this truly amazing set. The 8 piece band blends different styles such as Afro Beat, Jazz and Garage Rock with an edge of Psychedelica. The name orchestra does them justice as they are able to flex their aural muscles and overwhelm the listener at times and have more than enough in their arsenal to keeps things interesting.

The bassline of “Black Mamba” crawls upon you before the drum rolls enter and set the pace whilst the other players together make up for a sinister atmosphere. The lyrics are every bit as sinister as the music, raising the question about being condemned to serving ones purpose reaching salvation only after the work is done.

Without so much as a pauze “Black Mamba” naturally slithers its way into “State Of Mind”. The second track lightens the mood a bit with its uplifting melody line during the chorus. Although the music is less dark, the story about being held back by the limitations of your own mental state, isn’t exactly a nursery rhyme. The drum pattern is what drives this song forward and singer Kimberly Dhondt has a more prominent role with the remaining bandmembers painting the spaces left in between the rhythm and the lyrics.

Moving more towards Soul ballad territory “Little Sarah” progresses effortlessly around Kimberly’s devout approach. At the last salvo, the band gradually pushes the music towards the grand finale with Kimberly growling one more time before the curtains close.

“Hormones” is definitely one of my favorite tracks on the album. It demonstrates the talent the band has for orchestrating a rich piece of music encompassing all the styles that the band is influenced by. Using only percussion in the quieter passages instead of the drumkit makes the transition to the climax only more impressive erupting in a fierce guitar solo near the end.

Opening with this incredible horn riff, featuring outbursts of trumpet and the baritone sax hitting the low notes, is the somewhat more pop sense orientated “Sneaky”. Kimberly’s voice can be sweet or as though as nails when double crossing her. Her delivery, harsher than anywhere else on the album, together with the undertones of the baritone sax really adds that bit of greasiness this song needs to stick.

“Use You” is a piece of carefully constructed Jazz Funk. The band take their time on this one, clocking in well over 6 minutes. For a long time the music seems to stay in the groove before they crank up the tempo slipping into a frenetic sax solo. Finishing the album is “Woohoo”. Another slice of pop sensibility in the way the simplicity of the chorus will remain on your lips for some time.

All songs are recorded live at Jet Studio, the oldest recording studio in Belgium, which makes up for a lively and organic sound. An undeniable high-light in my CD collection which found it’s way back to my CD player. Going through my Spotify account, there was apparantly already a playlist that I specifically created for Nacht van de Kaap festival filled with bands who also hit the stage that day. A happy coincidence, enjoy!