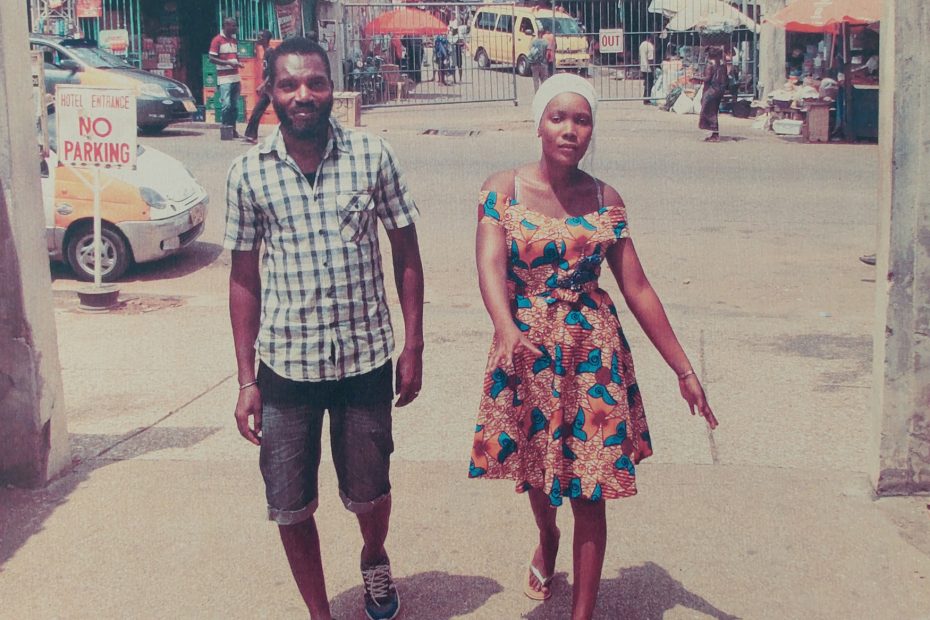 In keeping with my motto “keep discovering”, I immerse myself with all sorts of new music as much as I can. On that note, I made quite a discovery last week. One that will hopefully keep putting out great records for some time to come. Philophon is a German based record label created by Max Weissenfeldt, with a clear focus on supporting any form or shape of “local culture with reason, freedom and ludic drive”. To be close to the local scene and record local talent when the opportunity arises, they opened their own Joy Sound Studios in Ghana. Two of the artists on the label’s roster convinced me to place an order only after one listen and took permanent residency over my turntable.

Alogte Oho and His Sounds Of Joy got me bouncing back and forth through my living room in a strange jerking fashion. Luckily, only our baby was able to see what can only be described as an poor attempt to dance to this infectious Frafra-Gospel music. She was captivated by the strange movements and it didn’t take long for her to also join into the action, so all was forgiven. Opener “Mam Yinne Wa” comes with a full brass assembly playing against a gorgeous orchestrated backdrop. The flute might not be the first thing you pick up, but becomes more and more apparent until there is no return, ending in a memorizing solo by legendary Jazz musician Sabir Mateen. Stepping back, there is just one thing and one thing only to what makes the track transcend well above just the sum of individual greatness. The way all these individual textures interlock to form this irresistible groove topped with an astonishing performance by Alogte Oho and His Sounds of Joy. The vocals to “Mam Yinne Wa” were recorded in Ghana without a band. Listening to the track, Max felt the vocal track deserved a more evolved sound and recruited some excellent musicians to do justice to the heartfelt performance by Alogte Oho & His Sounds Of Joy back in Germany. Elevating such a vocal performance takes a delicate approach, but they nailed it as far as I’m concerned leaving the raw power of those marvelous harmonies shine as never before. The following two tracks follow in that same kaleidoscopic vein before we come across the first single released by the Alogte and His Sounds Of Joy on Philophon named “Zota Yinne”. This is another high point and has already become a highly sought after 12 inch for selectors on the Soundsystem scene. On the B side, we find one truly gorgeous track after another. Reminiscent of the golden days of Highlife, “Fom Se Mam” starts with a gentle push but quickly shakes off all further expectations with the brass lowering their pitch making the earth shake and rumble. The Reggae flavoured “Yu Ya Yumma” reminds me of “Many Moods Of Coxsone” through the use of an airy pan-flute while “Ma’algo” adds a bit of Latin flair to the mix.

The second album on this shortlist is Nsie Nsie by Y-Bayani and Baby Naa. It took multiple occasions, all by chance, over the course of a 8 year period for the sound to develop before launching a full album. Max’s friend Josie Coppola, who worked alongside some of the household names in Reggae such as Gentleman, Junior Kelly, Dean Fraser and Alborosie, was responsible for the initial idea to create some Reggae tracks. On a second occasion, during a jam session with the son of the legendary Ebo Taylor, Max got into contact with the talents of a local singer going by the name Y-Bayani. On yet another recording session 3 years after recording the original backing tracks in Germany, the final piece of the puzzle was found in Baby Naa. She was originally booked to sing backing vocals for both Ologte and His Sounds Of Joy and Y-Bayani, but turned out to  perfectly blend with Y-Bayani’s voice. The end result is a stunning album featuring 9 original songs that fill your living room with life. The album kicks off with the title track “Nsie Nsie”, balancing nicely between the sinister tones of the synthesizer and the uplifting harmonies. The galaxy Funk of “Asafo Weyasi” reminds me of Roy Ayers Ubiquity with some of William Onyeabor in the mix, but is all original. “Rehwe Mi Enyim” is a true gem in every sense of the word next to being the first song that Y-Bayani and Baby Naa sang together. The slow rhythm perfectly demonstrates that pairing both voices was the best thing that could have happened for this project. The eerie sounds effects creep upon you as they find their way through the echo chamber of the drum and bass putting you on a path of auditory righteousness. The fat throbbing bassline of “Get Away” is a real headbanger, leaving you bobbing long after the needle runs through the last groove. The second side opens with a pure instrumental track before we come across another highlight in the form of “Asembi Ara Amba”. This is the very first song that Y-Bayani has ever written and got released locally to storm the Afro-pop radio charts. Luckily, Max convinced Y-Bayani to record a Reggae interpretation for Nsie Nsie even though I’m also interested in hearing the original. The album draws to an end with a four minute instrumental, celebrating enlightenment, reason and love as a nod of gratitude to the studio band and everyone involved in the project.