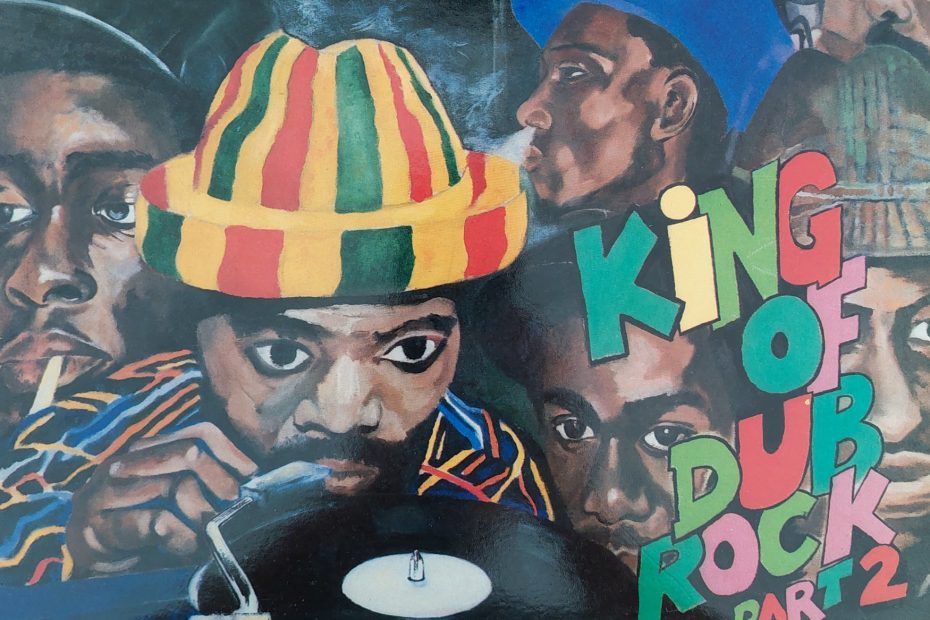 Following Dub cover art part 1 en 2, this third chapter will feature two albums rather than one together forming the King Of The Dub Rock series. Whether it is your first Dub album you are going to listen to or the thousandth, you will quickly hear why this is such an enjoyable series which takes an unique place in the world of Dub both historically and musically. Both are produced by Jamaican born Sir Lloyd Coxsone who burrowed his surname from the famous owner of Studio One, Sir Coxsone Dobb. Lloyd himself is being credited by many as one of the founding members of the UK Soundsystem scene. He witnessed firsthand the lack of entertainment in black populated area’s and quickly founded his Sir Coxsone Outernational Soundsystem in 1968 to make the people feel closer to home.

Mostly build on rhythm tracks from Jamaica, the first album contain the very first few clues of an emerging UK based offspring, that would soon mature and thus bridges a gap between two era’s. That alone makes it a highly collectible album for Dub aficionados. For the parts that were recorded in the UK, Lloyd employed some musicians who later would be known as Matumbi.

King Of The Dub Rock Part 1 is a typical King Tubby exercise using his signature high-pass filter highlighting the Hi Hats combined with lethal doses of reverb and delay. The rhythm tracks are full and rich with lush melodies lines which evoke the optimistic sounds of the late 60 and early 70’s rather than the style popular in Jamaica at the time of its release. The second part is more sparse and adds a lot of sound effects to the mix, closer to what was popular at the time in 1982. Most likely Lloyd was inspired by Scientist and Prince Jammy, two of King Tubby’s protégé’s who basically run the Dub scene from 1980 onwards. He even employed Scientist to do some of the mixes himself.

There isn’t much known about the artwork for King Of The Dub Rock Part 1, except that it was created by Tyrone Bavo and the fact that I absolutely love it. Apart from the name of Sir Coxson Sound and the title, the Medusa like character with dreads, pale green skin and red eyes will leave everyone clueless as of what they can expect musically. It could as well be used as the cover of an old Spiderman comic were he takes on the Green Goblin. For the artwork of the second part, the liner notes at the back and the internet provided me with more information. The paintings for both the front and back were done by Paul Bradshaw, a long time writer on everything Reggae and beyond. He also runs his own blog and coincidently published an article last month on his good friend Jean Bernard Sohiez, affectionately named “Frenchie” by the Coxsone crew. It was actually the photographic work of his good friend “Frenchie” that inspired Paul to come up with both paintings. Had I chosen to write any earlier on this album, would have landed me more questions than answers. Unfortunately “Frenchie” has just passed away this June. The vigour and passion in which Paul managed to put down his story in words is as touching as it is inspiring. Showing some stunning photos taken by his dear friend at the time, preserving a piece of Reggae history that otherwise would be lost.